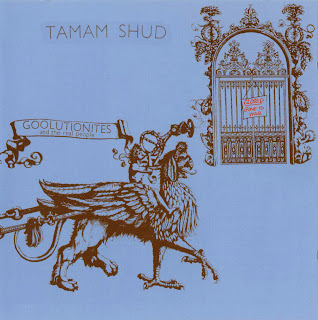 Tamam Shud was one of the most original and innovative Australian groups of the late '60s and early '70s, and they played a very important part in our musical development as pioneers of acid-rock and progressive music. Long after they split they remained a 'cult' item, and a definite mystique still surrounds them. Their original recordings were (and still are) highly prized by collectors and aficionados, but they are now very hard to obtain. This legendary Australian band made two albums. Their debut the acclaimed 1969 album "Evolution", was filled with guitar a driven psych prog, clearly borrowed from the UK and US hardrock bands of that time. The second album "Goolutionites" is regarded as the bands masterpiece ,and originally released in 1970 by Warner brothers, is certainly their opus major. Featuring the amazing guitar talents of the 16-year old Tim Gaze it's one of the finest Australian prog psych offerings of all time on a par with the Masters Apprentices "Toast To Panama Red".
Happily there was a brief but gratifying comeback and some commercial success with their superb 1994 album Permanent Culture and the hard-driving, bluesy single "Stay", which delighted longtime fans of this outstanding group, and kindled interest with younger listeners as well.