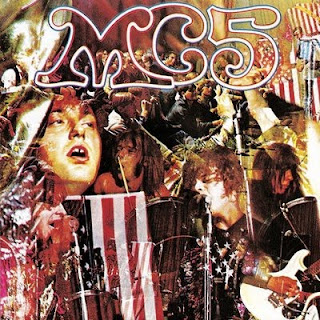 Rather than try to capture their legendary on-stage energy in a studio, MC5 opted to record their first album during a live concert at their home base, Detroit's Grande Ballroom, and while some folks who were there have quibbled that Kick Out the Jams isn't the most accurate representation of the band's sound, it's certainly the best of the band's three original albums, and easily beats the many semiauthorized live recordings of MC5 that have emerged in recent years, if only for the clarity of Bruce Botnick's recording. From Brother J.C. Crawford's rabble-rousing introduction to the final wash on feedback on "Starship," Kick Out the Jams is one of the most powerfully energetic live albums ever made; Wayne Kramer and Fred "Sonic" Smith were a lethal combination on tightly interlocked guitars, bassist Michael Davis and drummer Dennis Thompson were as strong a rhythm section as Detroit ever produced, and Rob Tyner's vocals could actually match the soulful firepower of the musicians, no small accomplishment. Even on the relatively subdued numbers (such as the blues workout "Motor City Is Burning"), the band sound like they're locked in tight and cooking with gas, while the full-blown rockers (pretty much all of side one) are as gloriously thunderous as anything ever committed to tape; this is an album that refuses to be played quietly. For many years, Detroit was considered the High Energy Rock & Roll Capital of the World, and Kick Out the Jams provided all the evidence anyone might need for the city to hold onto the title. AMG.

you can find cache valley drifters over here: