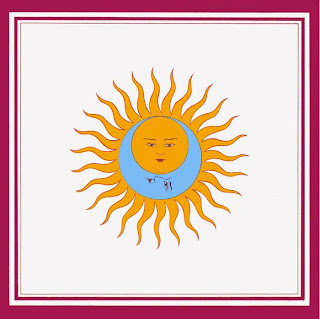 King Crimson reborn yet again -- the newly configured band makes its debut with a violin (courtesy of David Cross) sharing center stage with Robert Fripp's guitars and his Mellotron, which is pushed into the background. The music is the most experimental of Fripp's career up to this time -- though some of it actually dated (in embryonic form) back to the tail end of the Boz Burrell-Ian Wallace-Mel Collins lineup. And John Wetton was the group's strongest singer/bassist since Greg Lake's departure three years earlier. What's more, this lineup quickly established itself as a powerful performing unit working in a more purely experimental, less jazz-oriented vein than its immediate predecessor. "Outer Limits music" was how one reviewer referred to it, mixing Cross' demonic fiddling with shrieking electronics, Bill Bruford's astounding dexterity at the drum kit, Jamie Muir's melodic and usually understated percussion, Wetton's thundering (yet melodic) bass, and Fripp's guitar, which generated sounds ranging from traditional classical and soft pop-jazz licks to hair-curling electric flourishes. [The remastered edition, which appeared in the summer of 2000 in Europe and slightly later in America, features beautifully remastered sound -- among other advantages, it moves the finger cymbals opening the first section of the title track into sharp focus, with minimal hiss or noise to obscure them, exposes the multiple percussion instruments used on the opening of "Easy Money," and gives far more clarity to "The Talking Drum." This version is superior to any prior CD release of Larks' Tongues in Aspic, and contains a booklet reprinting period press clippings, session information, and production background on the album.] AMG.