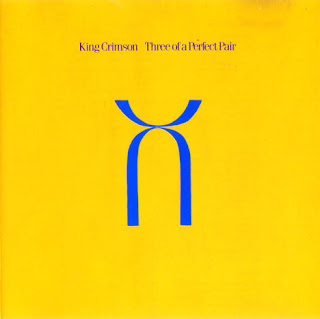 Upon its release in 1984, Three of a Perfect Pair caused some unrest among fans of King Crimson. Most of their audience felt that the band had made a conscious and obvious decision to try to break through to a more mainstream pop audience. But in hindsight, this is hardly the case; it sounds unlike anything that was out at the time. Like 1982's Beat, Three of a Perfect Pair doesn't quite meet the high standards set by 1981's Discipline, but does contain a few Crimson treats. The opening title track contains an unrelenting groove that never seems to let up, while "Sleepless" starts off with Tony Levin laying down some funky bass until Adrian Belew's trademark paranoid vocals kick in and assure the listener that "it's alright to feel a little fear." Also included are the seven-minute instrumental soundscape "Industry" and the cautionary tale of a "Model Man." This would prove to be the new King Crimson's last release for nearly ten years; the group disbanded soon after as its members concentrated on solo careers and other projects, until a mid-'90s reunion brought them all back together. AMG.