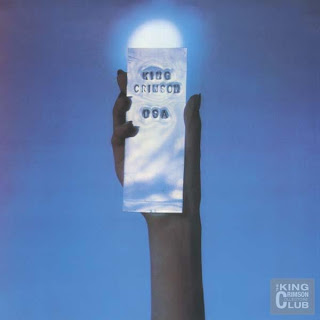 As Robert Fripp had done with King Crimson's first live LP, Earthbound (1972), USA (1974) is a single-disc concert package documenting the quartet during its most concurrent swing through North America. As with its predecessor, USA was also issued as a sonic cenotaph of the concurrently defunct Krim. So insistent that the band would not be resurrected, Fripp concluded the LP's liner notes at the time with another three-letter epitaph: "R.I.P." The 1973/1974 King Crimson included the collective efforts of Fripp (guitar/mellotron), David Cross (violin), John Wetton (bass/vocals), and Bill Bruford (drums/percussion). USA also includes notable violin overdubs by Eddie Jobson on the tracks "Larks' Tongues in Aspic, Pt. 2" and "21st Century Schizoid Man," as well as electric piano addendums to "Lament." The opening drone -- indexed as "Walk On....No Pussyfooting" for the 30th anniversary release in 2002 -- re-creates the typical performance prelude, which is lifted directly from the Fripp and Brian Eno sonic sculpture No Pussyfooting (1973). The brusque juxtaposition of the ethereal opening to the aggressive "Larks' Tongues in Aspic, Pt. 2" jolts the audience into the rips and snorts found during this tautly rendered instrumental. The readings of "Lament" and "Exiles" demonstrate this band's overwhelming sonic sensibilities. They are able to contrast and incorporate thick, viscous melodies and rhythms with alternately underlying sensitive, as well as ultimately beautiful, musical responses. A majority of the release is taken from a performance on June 28, 1974, at the Casino in Asbury Park, NJ, with the notable exception of "21st Century Schizoid Man," which was recorded two nights later at the Palace Theater in Providence, RI. The previously mentioned 30th anniversary edition marks the legitimate digital debut of USA. The extended CD format allows for the addition of "Fracture" and "Starless" from the Casino show. Additional live recordings of this band can be found on the four-disc The Great Deceiver collection and Night Watch, as well as Live in Central Park, NYC '74 and Live in Mainz 1974 from the King Crimson Collectors' Club. AMG.

A great Christmas gift sure it is !
Obrigado mi amigo

re-up?
If i remember right i saw stuff from u going back before 2010. However 2010 is as far as the list to the right goes back.... i am on a slow DSL feed so it would take me a while to DL anything anyway... but u certainly have my interest.
(also have u noticed the trick that mediafire, or at least the way u r using it, has a kind of error in favor of todos hermanos (y hermanas).