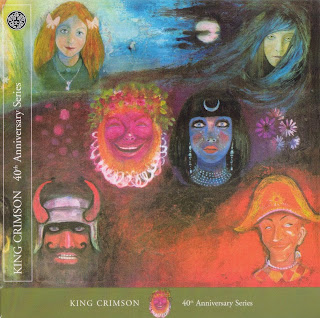 King Crimson opened 1970 scarcely in existence as a band, having lost two key members (Ian McDonald and Michael Giles), with a third (Greg Lake) about to leave. Their second album -- largely composed of Robert Fripp's songwriting and material salvaged from their stage repertory ("Pictures of a City" and "The Devil's Triangle") -- is actually better produced and better sounding than their first. Surprisingly, Fripp's guitar is not the dominant instrument here: The Mellotron, taken over by Fripp after McDonald's departure -- and played even better than before -- still remains the band's signature. The record doesn't tread enough new ground to precisely rival In the Court of the Crimson King. Fripp, however, has made an impressive show of transmuting material that worked on stage ("Mars" aka "The Devil's Triangle") into viable studio creations, and "Cadence and Cascade" may be the prettiest song the group ever cut. "The Devil's Triangle," which is essentially an unauthorized adaptation of "Mars, Bringer of War" from Gustav Holst's The Planets, was later used in an eerie Bermuda Triangle documentary of the same name. [In March of 2000, Caroline and Virgin released a 24-bit digitally remastered job that puts the two Mellotrons, Michael Giles' drums, Peter Giles' bass, and even Fripp's acoustic guitar and Keith Tippett's acoustic piano practically in the lap of the listener.] AMG.