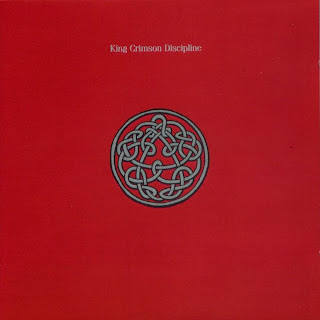 When King Crimson leader Robert Fripp decided to assemble a new version of the band in the early '80s, prog rock fans rejoiced, and most new wave fans frowned. But after hearing this new unit's first release, 1981's Discipline, all the elements that made other arty new wave rockers (i.e., Talking Heads, Pere Ubu, the Police, etc.) successful were evident. Combining the futuristic guitar of Adrian Belew with the textured guitar of Fripp doesn't sound like it would work on paper, but the pairing of these two originals worked out magically. Rounding out the quartet was bass wizard Tony Levin and ex-Yes drummer Bill Bruford. Belew's vocals fit the music perfectly, sounding like David Byrne at his most paranoid at times (the funk track "Thela Hun Ginjeet"). Some other highlights include Tony Levin's "stick" (a strange bass-like instrument)-driven opener "Elephant Talk," the atmospheric "The Sheltering Sky," and the heavy rocker "Indiscipline." Many Crimson fans consider this album one of their best, right up there with In the Court of the Crimson King. It's easy to understand why after you hear the inspired performances by this hungry new version of the band. AMG.