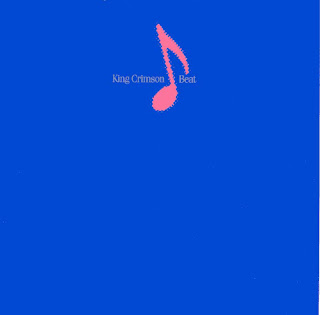 Beat is not as good as its predecessor (1981's Discipline), but it's not too shabby, either. The '80s version of King Crimson (Robert Fripp, guitar; Adrian Belew, vocals/guitar; Tony Levin, bass; and Bill Bruford, drums) retains the then-modern new wave sound introduced on Discipline. The band's performances are still inspired, but the songwriting isn't as catchy or strong. The moody love song "Heartbeat" has become a concert favorite for the band, and contains a Jimi Hendrix-like backward guitar solo. Other worthwhile tracks include "Waiting Man," which features world music sounds (thanks to some stunning bass/percussion interplay), and "Neurotica" does an excellent job of painting an unwavering picture of a large U.S. city, with its jerky rhythms and tense vocals. With lots of different guitar textures, bass explorations, and uncommon drum rhythms present, King Crimson's Beat will automatically appeal to other musicians. But since they're fantastic songwriters as well, you don't have to be a virtuoso to feel the passion of their music. AMG.

Congratulations! You´re doing a fantastic job with your blog.By the way, the link for this record seems to be wrong. It takes you to "three of a perfect pair" Can you correct it? Thanks

thanks for let me know the error! it's ok now. enjoy!