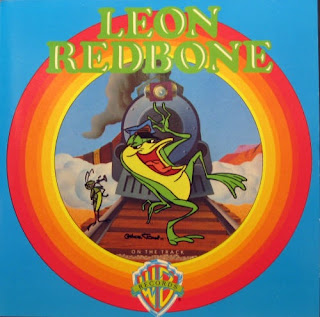 This is the debut long-player from Leon Redbone (guitar/harmonica/vocals/throat tromnet), a one-man folk/jazz enigma. Although it was incorrectly rumored that the artist was a musical visage of Frank Zappa, Redbone began getting notice during a stint in Toronto, Ontario, in the early '70s. For On the Track (1975), he offers a uniquely authentic revival of turn-of-the-century melodies, including those of the Singin' Brakeman, Mississippi Blue Yodeler Jimmie Rodgers ("Desert Blues") as well as Fats Waller ("Ain't Misbehavin'"). However, he liberally applies the same notable technique to a wide array of pop standards from the likes of Irving Berlin ("Marie") and Johnny Mercer ("Lazy Bones"). The minimalism in the arrangements provides an understated delivery focusing on Redbone's distinguished baritone vocals. This includes his self-proclaimed "throat tromnet" -- an orally generated device that sounds like a combination trombone and trumpet. Accompanying him are quite an aggregate of studio stalwarts -- such as percussionists Ralph McDonald (castanets) and Steven Gadd (drums) as well as legendary jazz heavies Milt Hinton (bass), Garnett Brown (trombone), Seldon Powell (sax), and Jonathan Dorn (tuba). Their contributions are likewise discreet and otherwise tastefully augment the highly developed and melody-intensive arrangements. The Spanish inflections of "My Walking Stick" work subtly behind the artist, supporting rather than detracting from his cool and expressive vocals. The swampy and lethargic "Lazybones" reverberates the swelter of the Delta summertime. Hinton's thick basslines amble along at an even pace -- while Redbone's drowsy vocals contrast the high and tight brass interjections and sonic ornamentation. "Lulu's Back in Town" recalls Rev. Gary Davis' talking blues, as it commences with a brief spoken introduction setting up the premise of the song. The manufactured sound effects of a mostly uninhabited pool hall are in essence a wink of the mind's eye for the listener. Famed jazz producer Joel Dorn was at the helm of these sessions and his experience provides an organic attention to nuance. On the whole, the lack of over-production allows the material room to breathe without stifling the arrangements, yet with enough augmentation to adequately support Redbone's more central delivery. AMG.