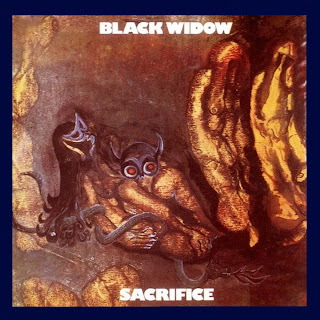 Black Widow may have enjoyed a reasonably long and defiantly varied career. But to anyone who cares, they will be remembered for just one song, "Come to the Sabbat" -- not a hit single, but a standout on a cheapo label compilation in the early '70s, and destined to live on for decades after the band. Naturally, the accompanying Sacrifice album has bounced along in its wake, first as an increasingly expensive vinyl collectors' item, more recently as a regular on the CD reissue circuit, and here it comes again, this time bearing more primal Black Widow than you could ever have dreamed of hearing. Ultimate Sacrifice: One opens, naturally, with the original seven-song album. More fascinating, however, is the chance to hear five of the seven ("Way to Power" and "Attack of the Demon" are absent) in their original demo form, where they are revealed, if anything, to be even more dramatic than on the final vinyl. "In Ancient Days" in particular profits from the looseness of the performance, while "Come to the Sabbat" packs a feel of abandonment that makes the familiar version seem quite sedate. Of course, the bonus tracks are really only of interest if you truly worship the original record, and, once past "Come to the Sabbat," there probably aren't many people who feel that strongly. But the liners tell the band's tale well, the remastering is impressive, and if you're not doing anything next weekend, you might well want to drop by Black Widow's house. They've got somebody visiting, you know. [In 2004, Castle reissued Sacrifice on CD with five bonus tracks, retitling it Ultimate Sacrifice: One.] AMG.