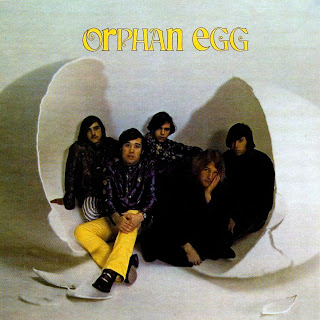 Orphan Egg's only release, this self-titled album which appeared on the Carole Record label in 1968.

The band, formed in 1967 in San Jose, was one of the lengthy list of Bay area groups inspired by the psych movement spreading its tentacles from the sound's spiritual home in San Francisco.

A majority of the band members were students at Saratoga High School in Saratoga when they won the Vox Battle Of The Bands, a nationwide competition.

The album, which also boasts some strong UK beat/psych influences a la early Status Quo, features lashings of incredible heavy fuzz guitar psych on a number of tracks, several of which were deemed worthy enough to feature in director Maury Dexter's exploitation flick, Born Wild, and which also included a memorable scene of the band strutting their musical stuff at a pool party.

The album consists of several covers including a killer version of the old Everly Brothers' hit, 'Bird Dog.'

Apart from this, the self-penned tunes really are the stand-outs here, with the feisty fuzz guitar, bass, drums, a little recorder and a smattering of harpsichord, combining, along the beautiful trippy vocals, to produce an ethereal, floating psych sound that makes for a hugely enjoyable listen." (review by Forcedexposure.com) . Thanks to phrockblog3.blogspot.com.