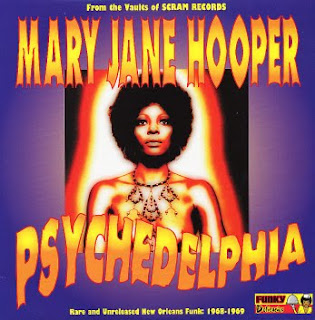 New Orleans funk diva Mary Jane Hooper remains one of the most shadowy figures in Crescent City soul history. Famed for her collaboration with legendary producer Eddie Bo, many believe she is simply an alias employed by singer Inez Cheatham, although Bo himself disputes such assertions. Hooper is in fact the stage name of one Sena Fletcher, who began her career singing gospel before crossing over to secular R&B backing Lee Dorsey. Upon signing to Bo's Scram label in 1966, Hooper issued her debut single, "Don't Change Nothin'." She eventually moved to Bo's Power label, where in 1968 she cut her best-known single, "That's How Strong My Love Is," later licensed for national release by World Pacific. "I've Got Reasons" followed later that year on Bo's renamed Power Pac imprint, but after the release of the two-part "I've Got What You Need" (justly famed for drummer James Black's monster groove), Hooper effectively disappeared. Her vocal similarities to Cheatham (another Eddie Bo protégée) prompted many funk collectors to assume the two singers were one and the same, further muddying the waters of her history and recorded output. AMG.