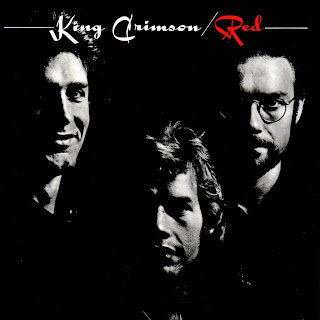 King Crimson fell apart once more, seemingly for the last time, as David Cross walked away during the making of this album. It became Robert Fripp's last thoughts on this version of the band, a bit noiser overall but with some surprising sounds featured, mostly out of the group's past -- Mel Collins' and Ian McDonald's saxes, Marc Charig's cornet, and Robin Miller's oboe, thus providing a glimpse of what the 1972-era King Crimson might've sounded like handling the later group's repertory (which nearly happened). Indeed, Charig's cornet gets just about the best showcase it ever had on a King Crimson album, and the truth is that few intact groups could have gotten an album as good as Red together. The fact that it was put together by a band in its death throes makes it all the more impressive an achievement. Indeed, Red does improve in some respects on certain aspects of the previous album -- including "Starless," a cousin to the prior album's title track -- and only the lower quality of the vocal compositions keeps this from being as strongly recommended as its two predecessors. [Red was reissued on CD in the summer of 2000 in a remastered edition that features killer sound and an excellent booklet, containing a good account of the circumstances surrounding the recording of this album.] AMG.