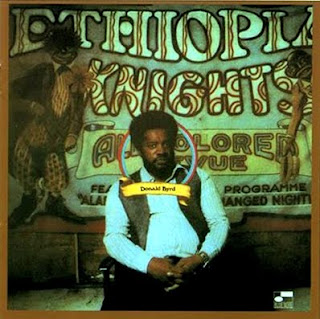 Right from the stop-start bass groove that opens "The Emperor," it's immediately clear that Ethiopian Knights is more indebted to funk -- not just funky jazz, but the straight-up James Brown/Sly Stone variety -- than any previous Donald Byrd project. And, like a true funk band, Byrd and his group work the same driving, polyrhythmic grooves over and over, making rhythm the focal point of the music. Although the musicians do improvise, their main objective is to keep the grooves pumping, using their solos more to create texture than harmonic complexity. That's why jazz purists began to detest Byrd with this album (though the follow-ups certainly cinched it); in truth, even though Ethiopian Knights did move Byrd closer to R&B, it's still more jazz than funk, and didn't completely foreshadow his crossover. The dense arrangements and lo-o-o-ng workouts (two of the three tracks are over 15 minutes) are indicative of Byrd's continued debt to Miles Davis, in particular the bevy of live double LPs Davis issued in the early '70s. Byrd again leads a large ensemble, but with mostly different players than on his recent sessions; some come from the group assembled for Bobby Hutcherson's Head On album, others from the Jazz Crusaders. That's part of the reason there are fewer traces of hard bop here, but it's also clear from the title that Byrd's emerging Afrocentric consciousness was leading him -- like Davis -- to seek ways of renewing jazz's connection to the people who created it. Even if it isn't quite as consistent as Kofi and Electric Byrd, Ethiopian Knights is another intriguing transitional effort that deepens the portrait of Byrd the acid jazz legend. AMG.

Hi Amigo,
Thanks for this one.