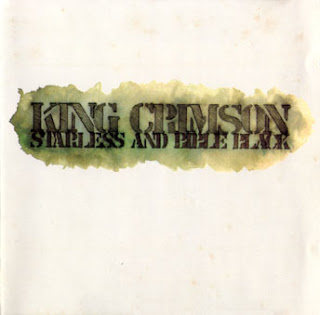 Starless and Bible Black is even more powerful and daring than its predecessor, Larks' Tongues in Aspic, with jarring tempo shifts, explosive guitar riffs, and soaring, elegant, and delicate violin and Mellotron parts scattered throughout its 41 minutes, often all in the same songs. The album was on the outer fringes of accessible progressive rock, with enough musical ideas explored to make Starless and Bible Black more than background for tripping the way Emerson, Lake & Palmer's albums were used. "The Night Watch," a song about a Rembrandt painting, was, incredibly, a single release, although it was much more representative of the sound that Crimson was abandoning than where it was going in 1973-1974. More to that point were the contents of side two of the original LP, a pair of instrumentals that threw the group's hardest sounds right in the face of the listener, and gained some converts in the process. [Starless and Bible Black was remastered again for CD in the summer of 2000, in significantly improved sound that brought out the details (and surprising lyricism) of much of the material in far greater detail. The booklet included with the remastered version is not as impressive as some of the rest of the series entries in terms of information, but has great photos.] AMG.