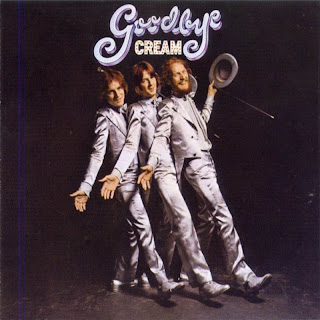 After a mere three albums in just under three years, Cream called it quits in 1969. Being proper gentlemen, they said their formal goodbyes with a tour and a farewell album called -- what else? -- Goodbye. As a slim, six-song single LP, it's far shorter than the rambling, out-of-control Wheels of Fire, but it boasts the same structure, evenly dividing its time between tracks cut on-stage and in the studio. While the live side contains nothing as indelible as "Crossroads," the live music on the whole is better than that on Wheels of Fire, capturing the trio at an empathetic peak as a band. It's hard, heavy rock, with Cream digging deep into their original "Politician" with the same intensity as they do on "Sitting on Top of the World," but it's the rampaging "I'm So Glad" that illustrates how far they've come; compare it to the original studio version on Fresh Cream and it's easy to see just how much further they're stretching their improvisation. The studio side also finds them at something of a peak. Boasting a song apiece from each member, it opens with the majestic classic "Badge," co-written by Eric Clapton and George Harrison and ranking among both of their best work. It's followed by Jack Bruce's "Doing That Scrapyard Thing," an overstuffed near-masterpiece filled with wonderful, imaginative eccentricities, and finally, there's Ginger Baker's tense, dramatic "What a Bringdown," easily the best original he contributed to the group. Like all of Cream's albums outside Disraeli Gears, Goodbye is an album of moments, not a tight cohesive work, but those moments are all quite strong on their own terms, making this a good and appropriate final bow. AMG.