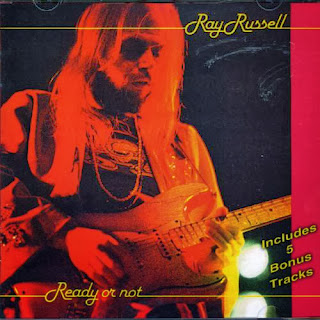 Guitarist Ray Russell may be the most successful member of the final lineup of the John Barry Seven, having gone on to a serious and highly regarded career in jazz and rock in England over the ensuing decades. Russell's introduction tothe John Barry Seven came when he read in the music press that the group's longtime lead guitarist, Vic Flick, was leaving the group -- he auditioned on a day off his regular job and won the spot by pretending that he could read music, and learned musical notation as a member of the band, after establishing his virtuosity. The corpulent, stockily built Russell (who resembled Roy Kinnear or Robbie Coltrane) was an improbable looking guitar hero, but his talent was incontestable. He made a good successor to Flick and stayed with the band to the end, in early 1965. He next played with Georgie Fame & the Blue Flames, and by the end of the 1960s he was working in tandem with Chris Spedding in the Mike Gibbs band, alongside bassist Jack Bruce and reedman Alan Skidmore.
During the 1970s, Russell passed through such ensembles as the Rock Workshop and the avant jazz-rock comboNucleus, and co-founded Chopyn (featuring Simon Phillips on drums) with keyboard player Ann Odell. He also played with Roxy Music's Andy Mackay on the soundtrack of the British television series Rock Follies, and became a member of Stackridge for a time. Russell was also the guitarist for the group Smith & D'Abo, and played a role in the benefit performances known as The Secret Policeman's Ball, alongside Eric Clapton, Neil Innes, et al. As a member of the fusion group the British Orchestra in the early '80s, he played and recorded the music of Gil Evans, and he also made his West End debut playing in the musical Time, starring Cliff Richard, in 1986.
Russell later formed his own group, the Ray Russell Band. He was a regular participant at the Montreux Jazz Festival throughout the 1980s and 1990s working in various group contexts, and has also played with the Simon Phillips Band. Although Russell is best known for his abilities as a jazz player, he has worked successfully across a vast range of musical idioms, including R&B/soul and heavy metal. Various recordings under his leadership have been issued over the years, including such career highlights as 1987’s Childscape featuring appearances by Gil Evans and Mark Ishamon the Theta label (reissued as Why Not Now on Melt 2000 in 1999 and with bonus tracks in 2004 on Angel Air), 1990’s A Table Near the Band on Last Chance Music (reissued by Angel Air in 2008), and 2006’s Goodbye Svengalion Cuneiform. AMG.