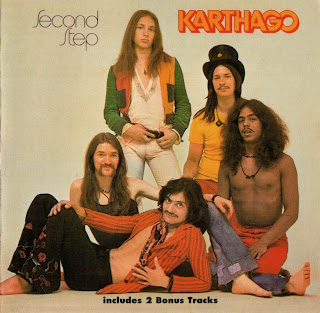 In the last month of 2011, MIG (Made In Germany) Records reissued a very important progressive rock masterpiece Second Step from Berlin based group Karthago. As crucial components to the formation of the krautrock movement that swept across Europe in the late 60′s and early 70′s, Karthago’s technical and creative approach is off the charts, glowing on the same level as any of the best innovators of the time. Second Step picks up right where their debut self titled full length left off on for burning scores into a region of sound few have gone. The one thing that I love about this band is their eagerness to pull from so many fields of sound that many other krautrock bands did not. One moment with Second Step and you will know exactly what I am talking about. was originally issued on the German label BASF (Badische Anilin- und Soda-Fabrik) in 1973 and features eight songs of sonic greatness. This expanded reissue see’s the inclusion of two bonus tracks, extensive liner note work and remastering on the original tapes that gives it that extra punch. To see their work reissued in this form only confirms how important this movement was and how much it is still growing in awareness. Karthago are mind blowing, don’t hesitate to check this band out.