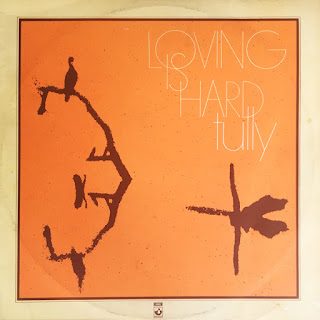 Luminous third and final album Loving Is Hard, originally released in 1972, is the latest in Chapter Music’s reissues series by Australian psychedelic icons Tully. This follows the 2010 release of Live At Sydney Town Hall 1969-70, and 2012's reissue of solemn, dreamy 1971 surf soundtrack Sea Of Joy. Even before they began recording Loving Is Hard in late 1971, Tully had officially broken up. Over the previous twelve months, they had shifted from the towering, organ-driven rock dynamics of their 1970 self-titled debut, to a serene, contemplative folk-psych sound. Show-stopping drummer Robert Taylor and original vocalist Terry Wilson had departed, replaced by guitarist Colin Campbell and singer Shayna Stewart, both of cult folk heroes Extradition.

Although the change created music of stark, unearthly beauty, Tully had been massively popular in Sydney as a rock band, and their spiritually-driven transformation left many fans scratching their heads. Audiences declined steadily, response to the Sea Of Joy soundtrack was muted, and by the end of 1971 they realized they could no longer continue. Still, they had one more album owing on their record contract, and decided to make a final statement before going their separate ways.