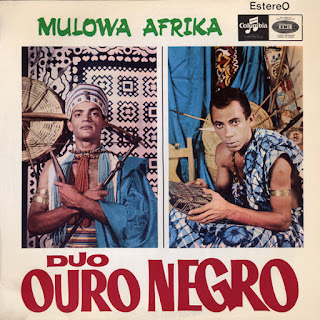 A sampling of Angola's top performers, including Marisa, Luis Represas, Bonga Kuenda, Pedro Joia and Banda Dizoma, gathered on May 23, 2003, to celebrate the 50th anniversary of one of the former Portuguese colony's greatest entertainers, Raúl Indipwo.

As one-half of Duo Ouro Negro ("Duo Black Gold"), a group that he shared with Milo MacMahon from 1959 until MacMahon's death in the late 1980s, Indipwo helped to introduce much of the world to the music of his homeland.

Friends since childhood, Indipwo and MacMahon increasingly attracted attention with their harmonizing. Within a year after their first concert at the Rome Cinema in Lisbon, for the Radio Club of the Portuguese Congo, they had performed in Switzerland, France, Finland, Sweden, Denmark, and Spain. Their dance-inspiring approach to South African-derived kwela made them the top group in Angola during the summer of 1965. Signed by Columbia Artists Management, they appeared at the Waldorf-Astoria in New York.

The political unrest had a powerful impact on the Duo Ouro Negro. Forced into exile at the height of the Angolan Civil War, Indipwo and MacMahon spent time residing in Finland, Sweden, and France. Their repertoire expanded to include Angolan folksongs.

Returning to Angola, after it had gained its independence from Portugal in 1975, Indipwo and MacMahon continued to perform together for another decade. AMG.