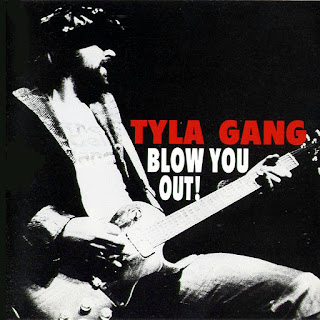 Following the break-up of Ducks Deluxe, Sean Tyla formed Tyla Gang in late autumn of 1975 with his brother Gary, Phil Nedin (drums) and Peter O'Sullivan (bass) from Welsh band Jack Straw. In the spring of 76, the late Richard Treece from Help Yourself joined the band. Within a few months Gary Tyler and Treece left the band and Welshman Tweke Lewis, formerly of Man, became the new guitarist. They went into Pebble Beach studio in Worthing, and under the guidance of producer Tony Platt recorded 6 tracks including "Suicide jockey" and "Cannons of the Boogie Night" as well as "Styrofoam" and "Texas chainsaw massacre booogie". These latter two tracks were released as the "double B-side" 4th single on the legendary Stiff Records label. Tyla also produced Stiff's eighth single Plummet Airlines' "Silver Shirt" / "This Is The World".

In April 1977 two further tracks from that session were released ("Cannons of the Boogie Night" and "Suicide Jockey") on Skydog records. In 1977 the second Tyla Gang band was formed consisting of guitarist Bruce Irvine, bassist Brian "Kid" Turrington and drummer Mike Desmarais; Turrington and Desmarais having played together in The Winkies.

Although unsigned, the Gang attracted critical attention and played two Peel Sessions in 1977 (30 May and 4 October). They eventually signed a contract with the Californian-based Beserkley label in 1977 and released their first album, Yachtless in 1978. Reviewing the LP in Christgau's Record Guide: Rock Albums of the Seventies (1981), Robert Christgau wrote: "Punk has not been good for former Duck Deluxe Sean T. because it's meant urbanization. I have nothing against the slick, hooky power chords his pub-rock has evolved into, not in theory. But when his charming if overly mythic tales of fireballs and West Texas running boards evolve into 'The Young Lords' (give me a break, Bruce Springsteen) and 'On the Street' (give me a break, Bob Geldof), I begin to crave recognizable human detail.

Partway through recording their next album Moonproof, Turrington left and Whaley joined to finish the album and this line-up recorded a Peel Session on 9 August 1978. Richard Treece, another former member of Help Yourself also joined, before Beserkley's UK operation went bankrupt in 1979, and Tyla disbanded the Gang shortly after.

In 2010 the Tyla Gang reformed in their original line-up, touring Sweden during the fall. In 2013, they added John McCoy of Gillan and Mammoth fame to replace original member, Brian Turrington who had taken a leave of absence for personal reasons. The Gang has released two albums since their reformation, 2010's "Rewired", a compilation of lost studio and live recordings and as of 18 March 2013, a new studio album, Stereo Tactics. In 2015 The Tyla Gang released a live set, Live In Stockholm recorded at the Akkurat Bar in Stockholm, Sweden in 2013 on Angel Air Records and will be releasing a 3-CD anthology, Pool Hall Punks through Cherry Red Records in May 2016 to coincide with Sean's 70th Birthday Tour.