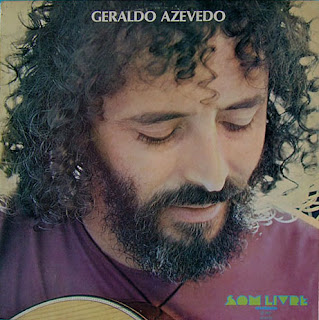 Romantic lyricism set to virtuosic guitar playing has made Geraldo Azevedo one of the top pop musicians in Brazil. Many of his compositions, including "Caravana," "Copacabana," "De Outra Maneira" and "Barcarola Do Sao Francisco," have become Brazilian pop classics. Born in Petrolina, a small town near the banks of the San Francisco River, Azevedo was heavily influenced by João Gilberto, who lived in Juazeiro, a city on the other side of the river. Self-taught on the guitar, he mastered the instrument by the age of twelve. Moving to the capital city of Recife in 1963, Azevedo formed Grupo Construcao with vocalist Teca Calazans and percussionist Naná Vasconcelos.
Four years later, he accepted an invitation by vocalist Eliana Pittman to relocate to Rio de Janeiro. Azevedo soon became one of the city's leading musicians and a highly respected accompanist for many top-ranked vocalists. Together with Vasconcelos, Nelson Ângelo and singer/songwriter Geraldo Vandré, with whom he co-wrote the popular "Cancao de Despedida" ("The Farewell Song"), Azevedo formed a band, Quarteto Livre. After the military government closed the Brazilian congress and instituted censorship in December 1968, the group disbanded. Azevedo attained international acclaim in 1991 when he teamed with Alçeu Valença to compose and perform two songs -- "78 Rotaces" and "Planetario" -- at a festival sponsored by Tupi TV in Sao Paulo. Signed by Casablanca, Azevedo and Valença released a self-titled duo album. In 1972, the two joined with folk singer Jackson Do Pandeiro to perform at an International Song Festival in Rio.Azevedo began to achieve recognition on his own, as well. Several of his songs were featured on the soundtrack of the Globo TV series Gabriela and Saramandaia. Azevedo's debut solo album released in 1973 became a major hit. In 1979, Azevedo and actress/singer Elba Ramalho recorded Bicho de 7 Cabcas. Azevedo recorded a live album in the Golden Room of the Casablanca in Rio in 1985. AMG.