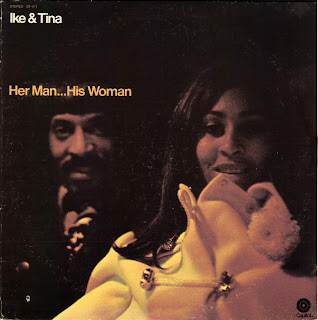 The duo had a string of R&B hits with their early recordings "A Fool In Love", "It's Gonna Work Out Fine", "I Idolize You", "Poor Fool", and "Tra La La La La". The release of "River Deep – Mountain High" in 1966, followed by a tour of the UK with the Rolling Stones, increased their popularity in Europe. Their later works are noted for interpretive soul-infused re-arrangements of rock songs such as "Come Together", "Honky Tonk Woman", and "Proud Mary", the latter of which won them a Grammy Award in 1972. Ike & Tina Turner received the first Golden European Record Award for their international hit "Nutbus City Limits" in 1974. They released dozens of albums; their most successful being Workin' Together and Live at Carnegie Hall. Pitchfork listed their album River Deep – Mountain High among the best of its era.  "Her Man...His Woman" is another album that solidifies their presence in the music world.

Thank you Carlos, again a great album from the late 60's.