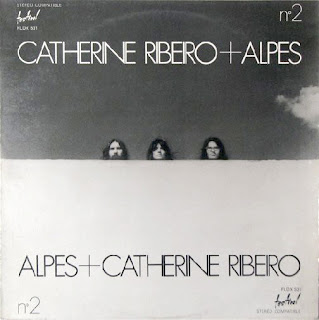 About the same time that Brigette Fontaine started releasing records that combined the traditional French chanteuse style with more radical and progressive music forms, Catherine Ribeiro was traveling a similar route, although she remained even more obscure internationally than Fontaine. Whereas Fontaine's voice is usually soft and sweet, Ribeiro can sometimes hit more harshly with lower tones, even sounding like Nico with far more emotion, over an experimental backing that can include folk-rock, progressive rock, improvisation, and more. Her unique voice certainly hints at her troubled upbringing. Born in 1941 in France to Portuguese immigrants, Ribeiro's early childhood was quite traumatic. With the constant bombs going off during the war, her mother often locked her in the cellar in the dark. Ribeiro's younger brother was six months old when he died suddenly, and when Ribeiro got older, she was often in and out of psychiatric wards. In her early twenties, she became an actor, appearing in a 1962 spaghetti Western Buffalo Bill and the next year in French New Wave director Jean Luc Godard's Les Carabiniers (aka The Mercenaries or the Soldiers). By the mid-'60s, she began taking her singing more seriously, and in 1966, she cut two singles for Barclay Records, one of which was a version of Dylan's "It's All Over Now Baby Blue." In 1969, Ribeiro had a new band, 2Bis, led by Patrice Moullet, to back her on her first LP, simply titled Catherine Ribeiro + 2 Bis, released on the Festival label. On her second LP simply titled No. 2, and also on Festival in 1970, 2Bis had become Alpes, the band that would follow Ribeiro on her next several releases. Besides Moullet, who provided guitars, organ, electronics, and vocals, Alpes consisted only of Denis Cohen on percussion and organ, though a pair of Portuguese guitarists, Pires Moliceiro and Isaac Robles Monteiro, were guest musicians on one track on No. 2. On subsequent releases, which came out about once a year on the Philips label, Alpes would often change completely from album to album, with Moullet as the only constant factor. These albums, Ame Debout ("Upright Soul"), Paix ("Peace"), Le Rat Debile et l'Homme des Champs ("The Weak Rat and the Man of the Fields"), and Libertes? are some of Ribeiro's most creative, with the music composed mostly by Moullet.

Even as Ribeiro continued to work with Alpes, she also started doing albums under her name alone where, instead of her own material, she paid tribute to older artists. The first of these was the 1977 release Le Blues de Piaf, where she covered songs done by Edith Piaf, followed by the 1978 LP Jacqueries, with works composed by Jacques Prévert and Sebastien Maroto. She also worked with other artists like Peter Gabriel on the 1992 record Soleil Dans l'Ombre (Sun in the Shade). By the early '80s, her output had slowed down a little. In 1999, she wrote a memoir of her early childhood, L'Enfance, published by L'Archipel, and she continues to occasionally tour live. AMG,