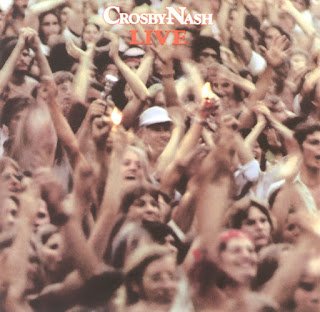 At the time of its original release in November of 1977, Live was a disappointment. As a single LP in the wake of Wind on the Water and Whistling Down the Wire, it seemed a backhanded insult to this duo, who had a lengthy and illustrious history (on the other hand, ABC Records, who released it, was virtually out of business at the time). The music also seemed somewhat perfunctory, and the content offered almost no recent material, just an odd choice of older songs.  The 2000-vintage CD fixed some of those problems, adding two key songs and improving Live in just about every way possible. Remastered from the original tapes, the music now has a lot of presence, the vocals retaining their warmth while the electric playing of the duo's backing group, the Mighty Jitters -- featuring Danny Kortchmar on lead, David Lindley on slide guitar and violin, and a rhythm section of Tim Drummond and Russ Kunkel -- is tight and muscular, and a lot closer to the listener. The improved sound makes it easier to appreciate the performances: "I Used to Be a King" is transformed into a soaring electric number ornamented by Craig Doerge's electronic keyboard playing on the break and a rousing, raw vocal performance by Graham Nash; similarly, Crosby's "Lee Shore" is given a fresh, punchier interpretation, miles from the ethereal studio rendition -- and perhaps not preferable to that version, but definitely different from it. The CD also includes a haunting, previously unissued Crosby song, "King of the Mountain," a beautiful, angry, ironic poetic essay into the consequences of fame and isolation, with a towering, startlingly atonal performance by co-author Doerge at the piano, and one of Crosby's best vocal performances ever. "Fieldworker" has a bracing urgency and immediacy that the studio version could never match. "Simple Man" sounds stunningly intimate and personal here; Lindley's violin accompaniment to Nash's solo acoustic guitar lends it a special level of lyricism and poignancy; and Crosby's "Foolish Man" starts out smooth and cool, harmonized very subtly, and suddenly sprouts a jagged, soulful edge to his singing and a surprisingly elegant lead performance by Kortchmar, until the last verse, where singer and guitarist cut loose with a sound barrage that's electrifying. "Bittersweet," the other track new to the CD, is worth the price of the CD, a lean arrangement for piano and acoustic guitar behind a soaring vocal performance by Crosby and Nash. Only the nine-minute-plus version of "Déjà Vu" doesn't quite come off. The annotation is highly informative, explaining the choice of certain tracks and the neglect of others, and putting the release in a historical context.AMG.

Hi Mauro, hope everything is ok with you, enjoy!