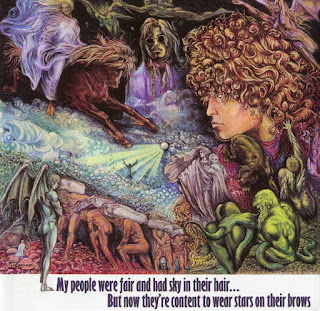 The Art Ensemble of Chicago - Bap-Tizum 1972 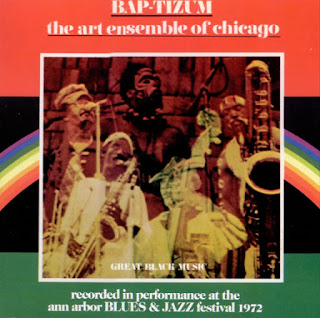 This was the Art Ensemble's breakthrough -- however short-lived -- onto a major U.S. label (Atlantic), as well as a document of the freewheeling band's first appearance at an American festival (the Ann Arbor Blues and Jazz Festival). With activist John Sinclair delivering the introduction, politics is in the air; the crowd is young and predisposed to radical ideas and the Art Ensemble holds back nothing in a chaotic, meandering, exasperating, outrageous -- and, thus, always fascinating -- performance. The band seems to be clearing its collective throat in the first half of the concert, opening with a battering all-percussion prelude. Roscoe Mitchell and Malachi Favors go at it at length in a staggered, honking tenor sax/bass duet on "Unanka," and Mitchell ratchets up the gears into screeching overdrive on "Oouffnoon." Finally, after a mocking intro by Lester Bowie, the 15-minute "Ohnedaruth" puts the Art Ensemble on full, ultra-colorful, wailing, free-form display (complete with a few vocal obscenities) before signing off with the "relatively" straight-ahead "Odwalla." It is interesting that Atlantic would lease these way-out recordings to Koch at a time (1998) when it was simultaneously putting out new, safer-sounding releases by the current Art Ensemble and its members. AMG.

Enviar a mensagem por emailDê a sua opinião!Partilhar no TwitterPartilhar no FacebookPartilhar no Pinterest
Etiquetas: The Art Ensemble of Chicago

Rock music's first two-LP box set, A Gift from a Flower to a Garden overcomes its original shortcomings and stands out as a prime artifact of the flower-power era that produced it. The music still seems a bit fey, and overall more spacy than the average Moody Blues album of this era, but the sheer range of subjects and influences make this a surprisingly rewarding work. Essentially two albums recorded simultaneously in the summer of 1967, the electric tracks include Jack Bruce among the session players. The acoustic tracks represent an attempt by Donovan to get back to his old sound and depart from the heavily electric singles ("Sunshine Superman," etc.) and albums he'd been doing -- it is folkier and bluesier (in an English folk sense) than much of his recent work. AMG. 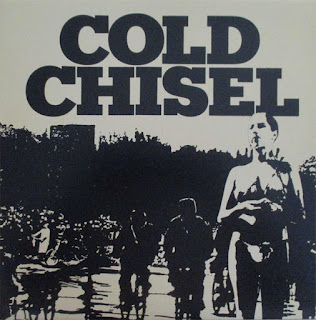 By the time Aussie rockers Cold Chisel did their sold-out farewell shows at the Sydney Entertainment Centre in December of 1983, they had established themselves as one of the all-time legendary bands down under. But this is the album that lit the fuse in the days when the crowds were eager but thin. After migrating from their home town of Adelaide, South Australia, to the big smoke of Sydney in 1977, the Chisels gained a rep for slugging it out on the pub circuit with an ardor worthy of their illustrious forebears AC/DC. But as Cold Chisel clearly illustrates, Chisel was a band married as much to melody as power. Pianist Don Walker's songwriting reflects an emotional depth and range rarely rivaled by other max-volume outfits. The Vietnam-vet song "Khe Sanh" became one of Aussie rock's most enduring anthems with its punchy piano line and everyman pathos. But full-throttle rockers like "Juliet," "Home and Broken Hearted," and "Daskarzine" -- with Ian Moss' Page/Hendrix-tinted guitar histrionics blitzing away -- packed all the clout pub fans could want. At the other end of the spectrum, gin-soaked ballads like "Rosaline" and "Just How Many Times" reveal the band's predilection for the occasional jazz/blues-inflected number. An enhanced, remastered version of the disc was released in May 2000 and included four bonus tracks. The lyrical imagery, the mix of musical finesse and freneticism, and Barnes' razor-wire vocals all came together in perfect synergy on this stunning debut album. At once polished and raw, this is a classic. AMG.

Cassidy - Music From Our Hearts To Your Ears 1977 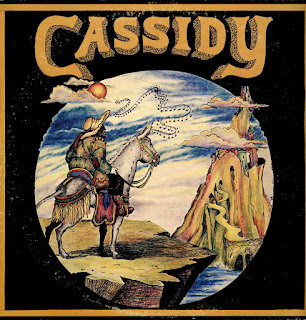 An interesting soft country rock from Indiana, deserves a listen. 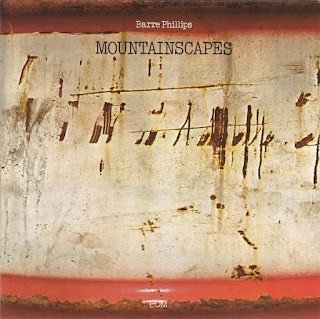 A virtuoso jazz and avant-garde bassist, Barre Phillips is a highly regarded improviser and composer who gained wide acclaim with his landmark 1968 album Journal Violone, the first complete album of solo bass improvisation. His 1971 record with Dave Holland, Music from Two Basses, is also regarded as one of the first records of improvised double-bass duets. The California native, who has lived in France since the '70s, has issued a prolific number of albums, including many on ECM like 1981's Music By... and 2004's Angles of Repose, and worked with such forward-thinking jazz icons as Barry Guy, John Surman, Paul Bley, and others.
Born in 1934 in San Francisco, California, Phillips started playing bass in his youth and studied privately for a period with S. Charles Siani, Assistant Principal Bassist with the San Francisco Symphony. Interested in both avant-garde classical music and jazz, he moved to New York City in 1960. A formative period for the bassist, he gained valuable experience playing with a handful of maverick artists including trumpeter Don Ellis and conductor Leonard Bernstein. 1965 was a banner year for Phillips, as he made his recorded debut playing with Archie Shepp's ensemble on the live set New Thing at Newport, and with keyboardist Bob James on 1965's Explosions. He also performed and recorded with vibraphonist Bobby Hutcherson, German guitarist Attila Zoller, and free jazz acolyte Marion Brown.

In 1967, Phillips traveled to London where he formed the influential outfit the Trio with saxophonist John Surman and drummer Stu Martin. The group performed numerous concerts, fitting nicely into the burgeoning British improvisational scene alongside contemporaries like Derek Bailey, Evan Parker, and Trevor Watts, among others. Around the same time, he was invited to record some music with composer Max Schubel, who had started working in London at Columbia's electro-acoustic studios making taped music. This led to the release of Phillips' influential 1968 solo bass album Journal Violone. Recorded in a church, the album is largely regarded as one of the first major solo bass albums of improvised music.
More solo bass opportunities followed for Phillips, and over the next few years he continued to build upon this idea, even pairing with bassist Dave Holland for the equally groundbreaking 1971 duet album Music from Two Basses on ECM. Also in the early '70s, he relocated to a rural section of southern France, setting up permanent residence in an old chateau. More albums followed for ECM, including 1971's For All It Is, featuring Palle Danielsson, Jean-François Jenny-Clark, Stu Martin, and Barry Guy. The similarly expansive Mountainscapes arrived in 1976, and featured contributions by saxophonist Surman and drummer Martin, as well as synth player Dieter Feichtner and guitarist John Abercrombie. In 1979, he returned to his solo bass format (a recurring source of interest throughout his career) with Journal Violone II.
During the '80s, he stayed active, issuing more albums on ECM including 1981's quintet date Music By... and 1984's solo bass album Call Me When You Get There. He also joined German instrumentalist Alfred Harth, Paul Bley, Trilok Gurtu, and Maggie Nicols on 1983's This Earth! He then rounded out the decade with another solo bass album, 1989's Camouflage, recorded live at Vancouver's Western Front. Along with his own albums like 1990's Naxos and 1996's Etchings in the Air, Phillips continued his relationship with Barry Guy, recording with the London Jazz Composers' Orchestra. He also joined Ornette Coleman on the soundtrack to director David Cronenberg's 1991 adaptation of William S. Burroughs' Naked Lunch. He then paired with bassist Yoshizawa Motoharu for 1997's Uzu, and collaborated with fellow bass virtuoso Bertram Turetzky and multi-instrumentalist Vinny Golia on 1999's Trignition.
In 2001, he again paired with Paul Bley and Evan Parker for Sankt Gerold on ECM. A further album of improvised solo performances, Journal Violone 9, arrived in 2001. Phillips then joined bassists Tetsu Saitoh, Joëlle Léandre, and William Parker for a live set at the Victoriaville FIMAV 2003 festival, issued in 2004 as After You've Gone. That same year, he appeared on the ECM trio session Angles of Repose with father and son duo reedman Joe Maneri, and viola player Mat Maneri. There were further sets, including 2006's The Iron Stone with Scottish multi-instrumentalist Robin Williamson, 2009's While You Were Out with Catherine Jauniaux and Ned Rothenberg, and 2011's quartet date Everybody Else But Me with Tony Bevan, Matthew Bourne, and Tony Buck. In 2018, Phillips issued End to End on ECM, an album he purportedly intended as his final solo bass album and the last in his Journal Violone series. AMG.

The Chocolate Watchband - One Step Beyond 1969 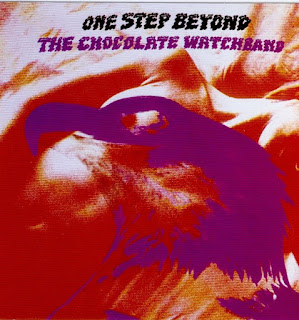 The third and final of the original studio albums by the Chocolate Watchband, One Step Beyond is a bit misleading and contradictory. On the one hand, it's as close as any performing group called the Chocolate Watchband ever got to making a finished album of their own, which is reflected in the fact that all but one song here was an original by the bandmembers; but on the other hand, this is a different Watchband lineup, assembled by Sean Tolby and Bill Flores, including guitarist Mark Loomis and drummer Gary Andrijasevich (both of whom had left in 1967 to join the Tingle Guild), and original, Foothill College-era Chocolate Watchband member Danny Phay (who'd also been in the Tingle Guild). Missing is David Aguilar, the band's one-time lead singer and most visible songwriter up to that time -- and the result is an album that has almost none of the influence of the Rolling Stones, and, instead, shows the greatest folk-rock influence in their history. The overall sound is brittle but melodic, reminiscent in some ways of the Quicksilver Messenger Service, the Charlatans, Moby Grape, and the Jefferson Airplane. Danny Phay isn't nearly as charismatic a singer as Aguilar, but he's not bad, either, and there are lots of interesting shared vocals. There's also quite a bit more guitar noodling here than on any previous Watchband recording -- that's not necessarily a bad thing, though it does dilute some of the impact of the punkier moments. "Devil's Motorcycle" is also of special interest to fans of Moby Grape, as it features the Grape's Jerry Miller subbing for Loomis on lead guitar. They shined on Ashford & Simpson's "I Don't Need No Doctor" as well as the Loomis/Andrijasevich original "Uncle Morris," and "Flowers" was a beautiful piece of folk-based psychedelia, while Sean Tolby's "Fireface" recaptured some of the original band's thicker rock textures. Original Foothill College-era member Ned Torney was also present on the sessions playing keyboards, but his work was left out of the final mix of the album, which meant the guitars got even greater exposure than intended. The overall album, which clocks in at well under 25 minutes, is an interesting and well-played coda to the band's history, but is also a long way from the sound of the group's earlier releases. AMG. 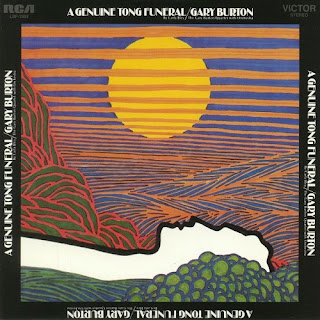 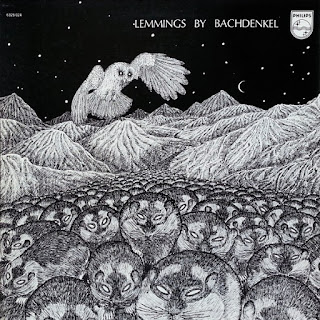 Although Bachdenkel is sometimes described of as a hard progressive band, its songs don't have the kind of keyboard-driven complexity normally associated with that genre. What they do have, though, are short songs with crunching guitar and pleasing vocal harmonies reminiscent of John Wetton's work with King Crimson. There's some nice dynamic contrast in their work when keyboards are brought in, as evidenced by the pensive "Equals" and "Come All Ye Faceless." Although this album may be destined to remain obscure, it does have one outstanding track that every collector should get their hands on: "An Appointment with the Master." It's a great combination of ripping leads, double-tracked vocals, and gloriously primitive garage-band drums. AMG. 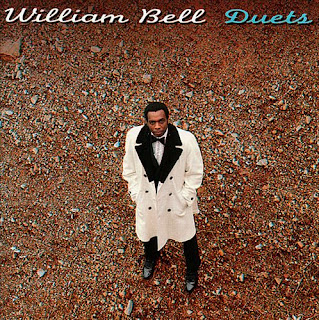 In the late '60s, Bell recorded a number of male/female duets with partners Judy Clay, Carla Thomas, and Mavis Staples; the ones with Clay were the most successful, "Private Number" and "My Baby Specializes" becoming modest R&B hits. All of his duet projects are assembled here, along with three solo sides that he cut in the 1970s. It's not among Bell's most striking work, but it's decent pop/soul, closer to Motown in feel than a lot of Stax material. I don't know what the deal is, but the version of "My Baby Specializes" here, though credited to Bell and Clay, only seems to feature Clay, unless that's Bell adding an odd backup grunt here and there. AMG.