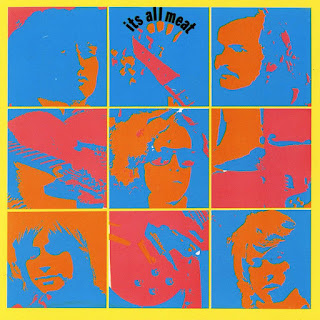 Led by Rick McKim & Jed MacKay, It's All Meat was one of the best bands of a great rock era, the missing link between psychedelic and punk.  With Rick on drums, Jed singing lead, and songs by McKim & MacKay, the Toronto band's self-titled 1970 album on Columbia Records—heard by a fortunate few at the time—has steadily mushroomed in stature & mystique, blowing fans away with its explosive mix of headlong drive, hair-raising guitars, haunting riffs and primal abandon.

Despite the crotch-grabbing allusions (as well as nods to the Animals song of the same name), It's All Meat actually took their name from a 1960s dog food commercial extolling the virtues of its beefy chow ("100% meat, no filler!"). The Toronto five-piece were led by their chief songwriters, drummer Rick McKim and keyboardist Jed McKay, who already boasted production credits on the Underworld's much-sought-after 1968 garage gem 'Go Away'. They were managed by none other than Jack London, he of mid-sixties hitmakers Jack London and the Sparrows. And though they were often overshadowed by the more successful acts of the day, It's All Meat still managed regular gigs at Dave Defries and Jerry Rugiel's Cosmic Home club up in what was then the city's northern fringes, wowing crowds with a sound that melded the blissful with the blistering.

On their lone LP, the Toronto five-piece seem to straddle the cusp of mid and late-sixties psychedelia. At the time It's All Meat found only limited release north of the 49th on Columbia Canada, which probably explains its stratospheric price point in collectors circles. The Hallucinations CD reissue, re-mastered beautifully from a vinyl source by Bruce Ley in Toronto, comes bookended with two of the group's finest non-LP songs. The disc virtually explodes with their debut 7" from 1969, 'Feel It', a searing slab of Stooges/MC5 proto-punk, a near-total Detroit guitar blitz that is then rather naively, though effectively, punctuated with cheesy Farfisa chords. All meat indeed!

The spectre of Jim Morrison and the Doors looms larger throughout the LP proper, however, as McKay's Farfisa morphs into a more eerie backdrop to his bold operatic vocals, especially on 'Crying into the Deep Lake'. 'Roll My Own' transcends the hoary cliche of its title with a haunting Hammond organ and an ample guitar/vocal mix, recalling John Kay and Steppenwolf. 'Sunday Love' opens like early Velvets with pastoral guitar before mounting a torrid Iberian rave-up. But there's gristle to be trimmed here as well, as It's All Meat sometimes bogs down in tepid blues riffs and overwrought vocals.

Seems I remember hearing about these guys but I don't know that I've ever heard their stuff...till now. Thank you

You are welcome, Jobe.

Thanks a lot also!

You are welcome, T.G.

Sounds great -- thank you very much!