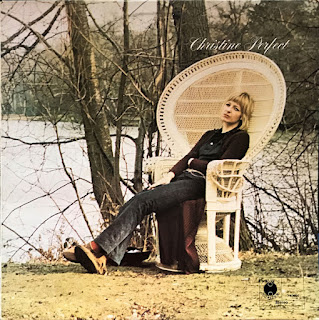 With her naturally smoky low alto vocal style and a knack for writing simple, direct, and memorable songs about the joys and pitfalls of love, Christine McVie has had a long and productive musical career while seldom insisting on being center stage. Born Christine Anne Perfect on July 12, 1943, in the small village of Bouth, the daughter of a concert violinist and a faith healer, a combination that just begs for uniqueness, McVie began playing the piano at the age of four and then found herself seriously studying the instrument at the age of 11, continuing her classical training until she was 15. That’s when she discovered rock & roll. While studying sculpture at an arts college near Birmingham for the next five years, she immersed herself in the local music scene, joining the band Sounds of Blue as a bassist. By the time McVie graduated with a teaching degree, Sounds of Blue had broken up, and she moved to London. In 1968 she reunited with two of the band’s former members, Andy Silvester and Stan Webb, in the British blues band Chicken Shack, playing piano and contributing vocals. The band released two albums, 40 Blue Fingers, Freshly Packed and Ready to Serve in 1968 and O.K. Ken? in 1969, and garnered a Top 20 hit in the U.K. with McVie’s impressive version of Etta James’ “I’d Rather Go Blind.” She left the band in 1969 after meeting Fleetwood Mac bassist John McVie, marrying him a year later, just after the release of her first solo album, the self-titled Christine Perfect.

Following the marriage, and now known as Christine McVie, she joined Fleetwood Mac as a pianist and singer and remained a member for the next 25 years, becoming a superstar in 1975 as part of the Lindsey Buckingham/Stevie Nicks version of the band. She and John McVie divorced in 1978, although both continued as members of Fleetwood Mac through the albums Tusk (1979) and Mirage (1982). She recorded and released a second solo album, simply called Christine McVie, in 1984. AMG.