Al Kooper - A Possible Projection of the Future - Childhood's End 1972 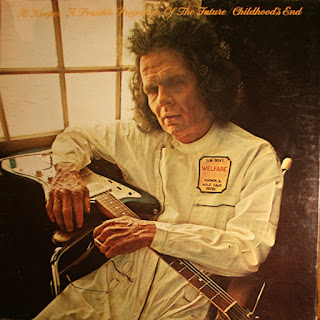 A Possible Projection of the Future / Childhood's End is American musician Al Kooper's fifth album, recorded for and released by Columbia Records in 1972. Begun with a vague storyline that failed to survive beyond the two title tracks, the album was recorded in London, England at George Martin's AIR Studios with one outtake from New York City (You're A Woman). Six original tracks were surrounded by covers of Bob Dylan ("The Man in Me", which Kooper had originally produced), Smokey Robinson ("Swept For You Baby"), and even Jimmy Cliff ("Please Tell Me Why"). The album cover showed Kooper as an eighty-year-old man, decrepit and clutching a Fender Jaguar guitar.