JuJu - A Message From Mozambique 1973 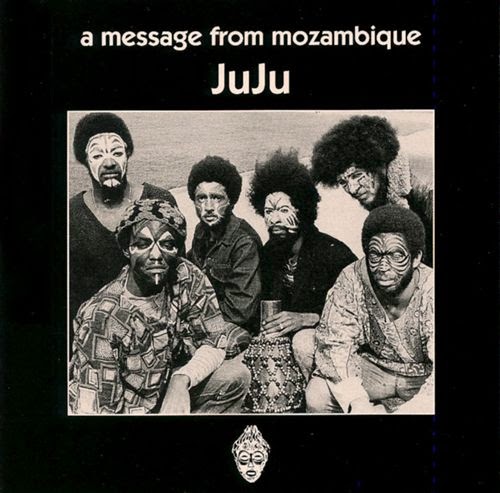 Juju is about ritual and rhythm and spirituality and joy. Plunky & Oneness of Juju is the name of a rhythm & blues-African-jazz-funk band from Richmond, Virginia, U.S.A. The group, originally known as Juju, was founded in San Francisco in 1971 and has continued to evolve for over 30 years, performing and recording with changes in personnel and under different group names, but always led by J. Plunky Branch.
The basic chronology has been as follows: the group was originally called Juju (1971-74), then Oneness of Juju (1975-81); then Plunky & Oneness of Juju (1982-88); and most recently Plunky & Oneness (1988 - present).
The original group, Juju, was composed of musicians who had been the music ensemble for a ritual/theatrical production entitled "The Resurrection of the Dead", written by San Francisco playwright, Marvin X. The six musicians had been chosen because of their previous musical experiences and their Afrocentric orientation to music and culture. In the play, each night there was ritualistic music, historical commemorative songs, improvisational music testimonials, and an actual naming ceremony in which members of the cast would receive new names. The musicians for this production were an important and driving component. When the theatrical production completed its run and the cast was disbanded, the musicians decided to continue their musical explorations and pursuits together. They formed a group and Juju was born.

Saxophonist, J. Plunky Branch from Richmond, Virginia and bassist, Ken Shabala (Kent Parker), from Brooklyn, New York, had met at Columbia University in New York where they attended college. There Plunky formed an R&B group called The Soul Syndicate and Kent Parker was its lead singer. From 1966 - 68 they played colleges and clubs in and around New York, setting and breaking attendance records at The Cheetah Night club in Manhattan and sharing the campus spotlight with another group from Columbia, Sha Na Na.
After college Plunky migrated to San Francisco and Kent followed. In 1969 they met vibraphonist, Lon Moshe (Ron Martin) from Chicago and joined an African avante-garde group called Ndikho and the Natives, led by South African pianist/percussionist, Ndikho Xaba. The group recorded one L.P. "Ndikho and the Natives".
Plunky, Ken Shabala and Lon joined the other original members of Juju: percussionist, Michael "Babatunde" Lea from Englewood, New Jersey; and two musicians from San Francisco: pianist, Al-Hammel Rasul (Tony Grayson) and percussionist, Jalongo Ngoma (Dennis Stewart).
These musicians had come from separate and distinct musical backgrounds. Plunky had been raised on southern rhythm & blues and gospel music and had studied jazz and classical music in school. Bassist, Ken Shabala was a R&B vocalist, jazz enthusiast and radio deejay in New York. Lon Moshe had been a part of the Chicago avante-garde jazz scene. Al-Hammel Rasul was a self-taught pianist who performed in his church and with various jazz and soul groups in San Francisco. Babatunde and Jalongo had long studied African, Afro-Cuban and Brazilian drums and chants and percussion.
As Juju, these young Black musicians dedicated themselves to using their music as a vehicle for raising political, spiritual and cultural consciousness. They practiced and rehearsed everyday for hours and hours and eventually developed a highly energetic, ritualistic, African, avante garde music based on rhythm, energy, improvisation, traditional chants and creative jazz. Juju performed in clubs, festivals and at political gatherings in the San Francisco Bay area, working with such notables as John Handy, Santana, Sun Ra, Pharaoh Sanders, Bill Summers, and others. The group recorded an album in 1972, Juju - A Message From Mozambique, which was released in 1973 on the Strata-East Records label.