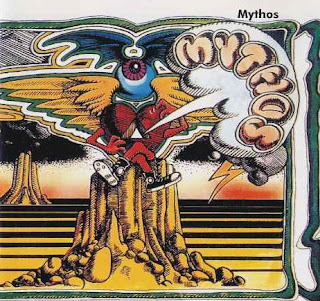 Krautrock Prog band, formed 1969 in Berlin, Germany. Always at the core of the band, through many line-up changes, was the multi-instrumental talent Stephan Kaske, who also was the lead singer. Mythos was always largely instrumental, rooted in the acid rock and cosmic sounds of Pink Floyd and Hawkwind, but with a wider sound palette.
The early albums are more cosmic Krautrock, whereas the mid/late 70's incarnation was heavier electronic rock, after which the band fell apart becoming the project of Stephan Kaske alone, doing electro-pop, and later soundtracks and library music.
listen here
Publicada por Madshoes Carlos à(s) 04:13

Carlos Hi Both links are dead.

Hi Spunkie thanks for your comment, in my side Mediafire link works ok, Solidfiles seems unavailable for a while, and they say to try later. I'll wait to see what's happening.

Carlos, I am also having problems with both downloads. Mediafire has been playing up on blogs all over the internet for a couple of weeks whilst working on others (blocking on copyright basis), as it is here now and is becoming really unpredictable. I managed to get through to Solidfiles by changing my VPN location buts its really slow and hasn't served up the download link. Update : and ultimate ly timed out and threw up error you spoke of

For me also both links are dead, no chance to get the file, can you fix please? Thanks a lot!

Thanks for the alert messages. I've updated for a new link, enjoy it!

Thanks for the new link. Mediafire does seem to have become more shill for Amazon. Those error messages used to go away after the third or fourth try. Now they appear to be permanent. Not sure what's going on with Solidfiles, but the Kraken link works fine. Much appreciated, as is all of your efforts with Madshoe's Musicology