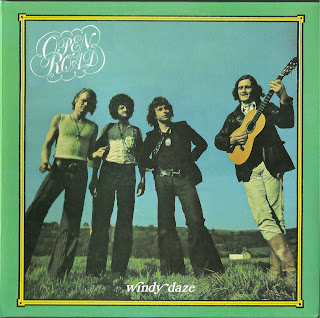 Open Road was formed by drummer John Carr and bassist/guitarist Mike Thomson in 1970. Both Carr and Thomson had been in Donovan’s band for his 1970 album Open Road. After the sessions, Donovan arranged some live shows with his new band, which he also named Open Road. After playing Europe, the band returned to the UK for the legendary 1970 Isle of Wight festival. Donovan parted company with his band soon afterward leaving Carr and Thomson free to use the name for their standalone project. Simon Lanzon was brought in on keyboards with Barry Husband on guitars.

Open Road, minus Donovan, was the first progressive group to sign with the newly formed Greenwich Gramophone label and they entered Olympic Studios in April 1971 to begin work on Windy Daze. Produced by Tony Reeves (Colosseum/Greenslade), the album was completed at Morgan Studios in London and fused both folk and progressive influences. A follow-up single, Swamp Fever b/w Lost and Found was released in February 1972, and Open Road entered Olympic Studios to record a second album with engineer Vic Smith. Open Road was never released and the group disbanded.