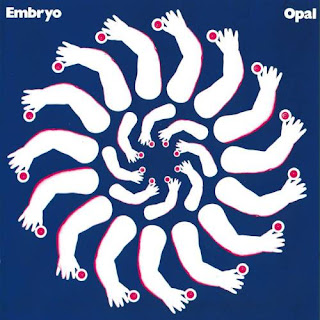 One of the most original, eclectic, and innovative Krautrock bands, Embryo fuse traditional ethnic music with their own jazzy space rock style. Over an existence spanning decades, the group have traveled the world, playing with hundreds of different musicians and releasing dozens of records. Debuting with the hard psychedelia of 1970's Opal, the band incorporated Moroccan tonal scales and traditional instrumentation on subsequent releases like 1973's We Keep On, and a lengthy bus tour of India shaped the sound of the 1979 double album Embryo's Reise. Embryo collaborated with Nigeria's Yoruba Dun Dun Orchester during the 1980s, and travels to Asia influenced 1996's Ni Hau. A collaboration with New York improv ensemble No-Neck Blues Band produced 2006's EmbryoNNCK, introducing Embryo to a new audience. Following the death of group founder Christian Burchard, Embryo continued under the leadership of his daughter, Marja Burchard, and released Auf Auf in 2021.

In 1972, the same year they played at the Olympic Games in Munich, Embryo were invited by the Goethe Institute to tour Northern Africa and Portugal. In Morocco, the band were fascinated by the different tonal scales used by Moroccan musicians, profoundly shaping the group's music to come. In 1973, they were joined by saxophonist Charlie Mariano and guitarist Roman Bunka, who were both influential in moving Embryo toward their genre-blending mixture of space rock and ethnic sounds. We Keep On, released in 1973, was the most successful album in the group's career. However, after Surfin' (1974) and Bad Heads & Bad Cats (1975), Burchard decided Embryo were moving in too commercial a direction and led them on an eight-month excursion to India, where they met local musicians. Shobha Gurtu, an Indian singer the bandmembers met during their travels, would later record an album with them, 1979's Apo Calypso. Embryo also set up their own record label, Schneeball, with the rock band Checkpoint Charlie during this time, releasing such albums as 1979's Embryo's Reise and 1982's La Blama Sparozzi - Zwischenzonen on the imprint. Embryo also took off on a two-year journey through the Middle East, India, Pakistan, and Afghanistan, during which the band's bus broke down in Tehran near the end of the Iranian Revolution in 1981; this musical expedition was captured by the documentary film Vagabunden-Karawane. Two longtime members, Uwe Müllrich and Michael Wehmeyer, left the group in 1981 and formed Embryo's Dissidenten, later known as just Dissidenten. After touring Asia, the Middle East, and Egypt during the early '80s, Embryo released the studio album Zack Gluck in 1984. The band then toured Africa and became involved with Nigeria's Yoruba Dun Dun Orchester, producing a 1985 studio album and the live release Jazzbühne Berlin '89 (aka Live in Berlin). 1994's Middle Eastern-influenced Ibn Battuta was recorded over the course of three years and released as a CD and a video. 1996's Ni Hau incorporated throat singing as well as Chinese and Indian instrumentation. Embryo continued to release both new and archival recordings into the 21st century, including 2006's EmbryoNNCK, a collaboration with the No-Neck Blues Band. Burchard suffered a stroke in 2016, which effectively ended his career as a musician, and his daughter Marja took over leadership of the group. Christian's final album with Embryo, It Do, was released by Trikont in October 2016. Christian Burchard died in January 2018 at the age of 71. Marja recorded sessions with musicians such as Roman Bunka and Jan Weissenfeldt, and completed the album Auf Auf in 2020. She approached fervent Embryo fan Madlib, whom the band had jammed with several years prior, about releasing the album, and Auf Auf was issued by Madlib Invazion in November 2021. AMG.