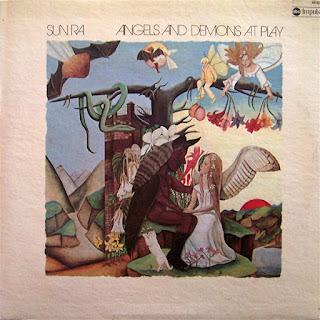 Angels and Demons at Play is a jazz album by the American musician Sun Ra and his Myth Science Arkestra.
Side one was recorded in 1960, including two tracks taken from the mammoth session either at Hall Recording Company or at the RCA Studios (both in Chicago), around 17 June 1960,[1] whilst the tracks on side two were recorded at the RCA studios, Chicago, around February 1956. Saturn Records had issued at least three of the songs ("Medicine for a Nightmare" b/w "Urnack", and "A Call For All Demons", the B-side of an early version of the song "Saturn") as 7" singles.
According to the musicologist Robert L. Campbell, the latter single was probably the very first Saturn release.[1] It was a relatively common theme of Saturn releases to feature different sessions, from different eras with different personnel, on different sides of a record. Other examples include The Invisible Shield (1962/1970) and Deep Purple (1948-57/1973).

Great taste! An excellent recording from the Arkestra.