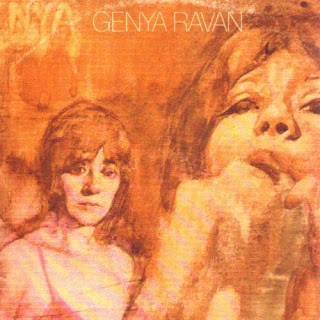 Genya was born in Łódź, Poland. She arrived in the United States in 1947, accompanied by her parents and one sister. She had two brothers, who died. These were the only family members who had survived the Nazi Holocaust in Europe.They did not speak any English. Genya Ravan was named 'Goldie' by her mother who claimed Genyusha was not American enough.
Goldie's career started in 1962 on a dare in a Brooklyn club called The Lollipop Lounge, which is also the title of her autobiography published by Billboard Books. On a dare in a bar, she jumped up to sing. "That was the first time I ever heard my voice". She was asked to join the band The Escorts, Richard Perry being one of the members. After signing to Decca Coral records and being produced by Henry Jerome, there was some success, they covered "Somewhere" from West Side Story and it went to number 1 in parts of the Mid-West. In 1963 she formed Goldie and The Gingerbreads after Genya met drummer Ginger Bianco in a Greenwich Village bar.
After seeing the band at a party for the Rolling Stones, Atlantic Records Chairman Ahmet Ertegün signed them to Atlantic subsidiary Atco Records. Goldie & the Gingerbreads were the first all-girl rock band in history to be signed to a major label and climb the charts.
While playing New York City's hot spot The Wagon Wheel on 45th Street in Times Square, Mike Jeffries, Eric Burdon, Hilton Valentine, and Chas Chandler spotted them, and wanted them to come to England. Goldie and The Gingerbreads toured with the Rolling Stones, the Yardbirds, the Kinks, and Manfred Mann. They reached the charts with their hit "Can't You Hear My Heart Beat" in 1965. The song reached #25 on the UK Singles Chart. The band stayed in London for two years.
Billed as "Goldie", she released the original version of the classic Carole King-Gerry Goffin composition "Goin' Back" in the spring of 1966. However this single was withdrawn within a week by producer Andrew Loog Oldham, due to disagreements with Goffin and King over altered lyrics. The song would be covered by Dusty Springfield three months later, making the U.K. top 10 singles chart.
Ravan and her two partners Aram Schefrin and Mike Zager formed Ten Wheel Drive in 1969. Ten Wheel Drive lasted three years. They recorded three albums for Polydor Records: Construction number 1, Brief Replies, Peculiar Friends Are Better Than No Friends. They had many fans, but the group did not take off. Genya left the band in 1971. She was signed to Columbia Records by Clive Davis where she made one album in 1972 titled simply Genya Ravan. Four more solo albums followed through the 1970s.
Ravan performed at the Atlanta Pop Festival, twice at Carnegie Hall and twice at Madison Square Garden, along with various clubs in New York City, Boston and Philadelphia, including the famous CBGB. She appeared on The Mike Douglas Show, The Johnny Carson Show, Della and The Dick Cavett Show television shows.
In 2011, the Rock and Roll Hall of Fame Museum included Goldie and The Gingerbreads in their Women in Music exhibit which travelled from state to state. Genya Ravan toured in 2013, selling out New York City's Iridium and is going back by popular demand. Jay Z sampled one of her tracks for his song "Oh God" from her Goldie Zelkowitz CD song "Whipping Post". Many Ten Wheel Drive tracks were also sampled by Hip Hop artists.
Genya appeared at the Musical Instrument Museum in Phoenix, alongside legends like Wanda Jackson, Martha Reeves, Maria Muldaur and Tracy Nelson as part of the museum's "Women Who Rock" exhibit. She and Reeves discovered a number of connections in that both worked with Richard Perry and were signed by Clive Davis. Further, one of the first songs Genya learned when she came to the US was "What Did I Do to be So Black and Blue," made famous by Fats Waller; a song Martha performed while starring in the road show of Ain't Misbehavin'. The two plan on working on a future project together.
A retrospective of her career is the subject of the Off Broadway musical Rock and Roll Refugee, which was profiled on National Public Radio's Weekend Edition Sunday on February 14, 2016.