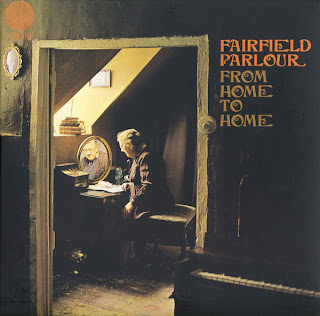 From Home to Home is quite similar to the albums this group had put out in the late '60s as the Kaleidoscope (the British Kaleidoscope, not to be confused with the American band of the same name). In fact, it's similar enough to the Kaleidoscope records to make one wonder why they bothered to change their name. Perhaps there is more polish and sophistication in the production, and a slightly heavier rock sound. But the focus is still gentle, story-like songs with debts to both late-'60s Pink Floyd and late-'60s Beatles, though the songs are not nearly as memorable as the work by those bands, and there is not nearly as much balance between chipper and somber material as the Beatles and Pink Floyd mustered. (Fairfield Parlour are heavily tilted toward the cheery tunes.) Tasteful early synthesizer is heard from time to time, and the debts to 1969 Beatles are heard in the Leslie amplification effects, though there are acoustic folk-psych passages with flute, too. The album has been reissued as half of the double-CD compilation The Fairfield Parlour Years, in conjunction with Fairfield Parlour's other 1970s album, the concept album White Faced Lady, which was not released until the 1990s. The disc on that set that contains From Home to Home adds bonus tracks from non-LP releases, along with the single they did under the name I Luv Wight, the previously unreleased movie theme "Eyewitness," and a far more recent re-recording of one song from From Home to Home, "Aries." AMG.

Just one global commentary. I feel completely back in my youth. I'm 15 and my wife and children really wonder what's happening.
Strange effect your posts have, Carlos.
Maybe you ought to deposit that elixir...

Hi Psegpp, Yes I can understand it! You just dived in your own fountain of youth, my friend. Memories are a strong elixir and can lead to very excellent "flash backs".

In my first Musicology version I just posted the name, the tittle and the front cover! Just that and no words, no review or history! Just that and more important your memories and the feelings it produced in you when you see the front cover, it's enough to start a voyage thru time!
So the famous elixir you are talking about it's YOU, my friend. Glad we are in the same spaceship!
Take care and enjoy!

Thank you for the explanations! ;-)
Your first version was surely subliminal... ans that marvelous. I often regret the vinyl covers which were more beautiful than the CD ones (however the last are often well done and contain interesting stuff).
You too, take care of yourself. And thanks for the shared pleasure (I often still detain the vinyl versions of the records you post).