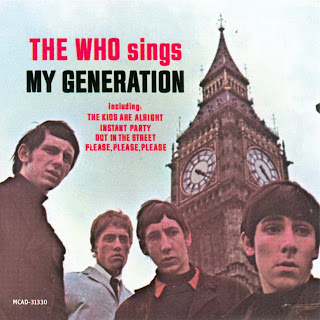 An explosive debut, and the hardest mod pop recorded by anyone. At the time of its release, it also had the most ferociously powerful guitars and drums yet captured on a rock record. Pete Townshend's exhilarating chord crunches and guitar distortions threaten to leap off the grooves on "My Generation" and "Out in the Street"; Keith Moon attacks the drums with a lightning, ruthless finesse throughout. Some "Maximum R&B" influence lingered in the two James Brown covers, but much of Townshend's original material fused Beatlesque hooks and power chords with anthemic mod lyrics, with "The Good's Gone," "Much Too Much," "La La La Lies," and especially "The Kids Are Alright" being highlights. "A Legal Matter" hinted at more ambitious lyrical concerns, and "The Ox" was instrumental mayhem that pushed the envelope of 1965 amplification with its guitar feedback and nonstop crashing drum rolls. While the execution was sometimes crude, and the songwriting not as sophisticated as it would shortly become, the Who never surpassed the pure energy level of this record. AMG.