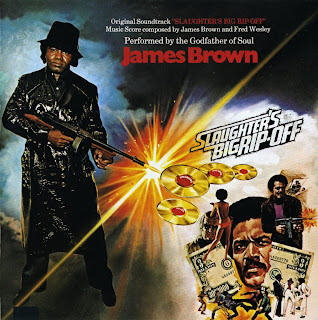 1973 was an extremely busy year for Brown. Not only did he continue to release two-plus albums a year, he was also producing and writing for the J.B.'s, plus other acts. During the early '70s Brown was still doing great work, but not much of it shows up here. While the earlier Black Caesar soundtrack found Brown engaged enough to offer great tracks, particularly, "The Boss" and "Down and Out in New York City," this one, also a soundtrack, finds him preoccupied. The swaggering and slick title track kicks things off here. "Trying to Get Over" and "Big Strong" both fall into the traps of bad movie music. Since an album of Brown doing chase themes seems horrifying, Slaughter's Big Rip Off does offer more. Throughout this effort he recycles some of his classic tracks; the oddly titled "Happy for the Poor" is actually a Latinized version of the J.B.'s 1971 single, "Gimme Some More." He goes back even further for his own 1970 classic, "Brother Rapp," which makes an appearance and has the "live" crowd removed. While it's unclear why he would resort to such odd song choices, he had one more shocker in store. "Sexy, Sexy, Sexy" uses the exact backing track from his 1967 hit "Money Won't Change You," with new vocals and lyrics on top. The sad part is that it works too well. While Slaughter's Big Rip Off proved that he wasn't going to be a soundtrack innovator, the idea of Brown in the film-scoring business has its own appeal. AllMusic.

hello mate!
please check out your RSS Feeds!
something's going wrong, so your page can't be in the blogroll rss/feeds

This & Black Caesar are James & the gang at the top of their game.